Muscle cramps and spasms are involuntary, often painful, contractions that can last several minutes and, in many instances, result in prolonged soreness. Muscle cramps and spasms are thought to result from hyperexcitable alpha-motor neurons. Spasticity is characterized by the combination of weakness and velocity-dependent resistance to stretch, in the same muscle. This reflex hyperexcitability may be due to the lost inhibition in spinal cord circuits. FLX-787 is based on a mechanism of action we describe as chemical neurostimulation. We believe chemical neurostimulation to be a process in which a molecule, such as FLX-787, acts topically on the surfaces of the mouth, throat, esophagus, and stomach, to produce a sensory signal by activating nerves in those tissues. That signal is thought to ultimately result in a beneficial effect. Specifically, our product candidates activate certain receptors known as transient receptor potential, or TRP, ion channels in primary sensory neurons producing a signal believed to inhibit neuronal circuits and thereby reduce hyperexcitability in the neurons that fire muscles. Reduced alpha-motor neuron hyperexcitability in spinal cord circuits is thought to suppress repetitive firing of alpha-motor neurons, thereby preventing or reducing muscle cramps and spasms, and potentially reducing reflex hyperexcitability and therefore spasticity. 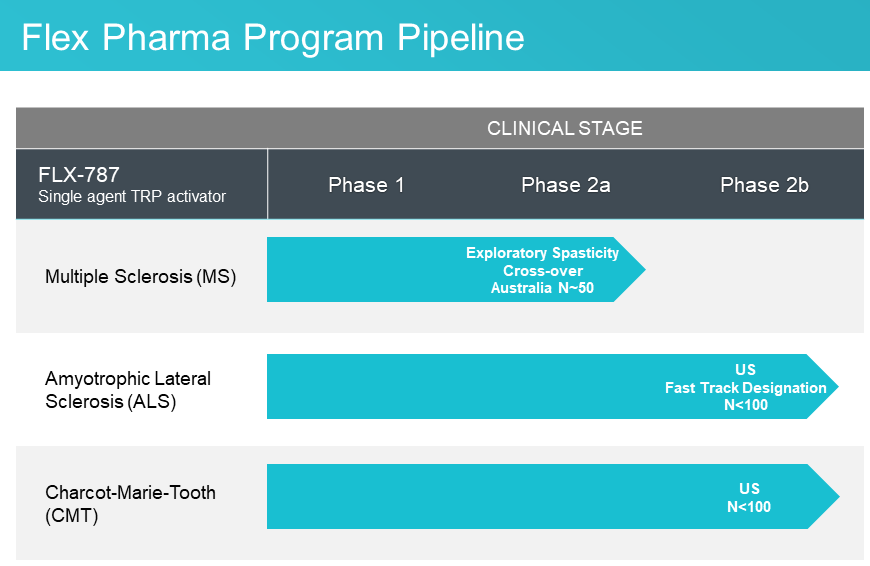